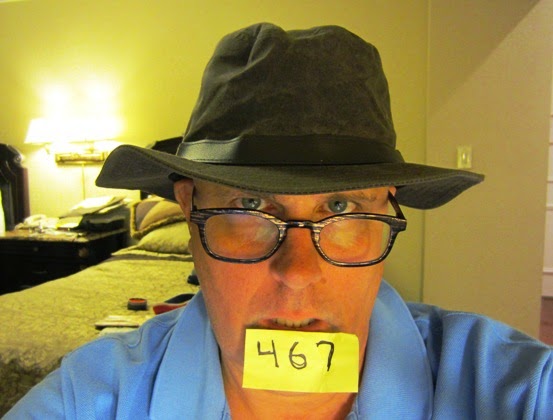 The Bride snapped this up at the Eddie Bauer outlet store in Manchester while we were kickin' it in the 802 and I'd salted it away as a safety hat during the NYFW slog. But only a few days in and I find myself ripping the lid off the 'mergency lid stash and have now depleted all my headgear resources.

Tomorrow I shall scout for more lids.(To my credit, I tried to buy the one out of the display case at a new burger joint just around the corner on Broadway called brgr but was told they weren't for sale.)

Of course, there's always a hope that the hat gods - who have always heard my fervent prayers -- will furnish me with all that I need to complete my quest.

A: One man's homage to Dr. Seuss and his second book, "The 500 Hats of Bartholemew Cubbins," which celebrated the 75th anniversary of its publication in 2013, Project Cubbins is an attempt to document the wearing of a different hat or piece of headgear every day for 500 consecutive days. No do-aheads, no banking of hats, no retroactive entries. PC started on May 27, 2013 with Hat 1.
Posted by Adam Tschorn at 6:14 PM