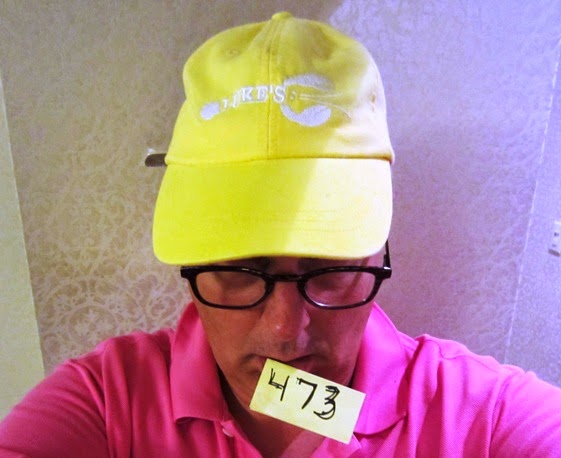 Day 473 / Hat 473: Lemon yellow, baseball style cap with white embroidery that reads: "Luke's" with an embroidered lobster tail at one end and embroidered claws, head and antennae at the other. Additional detail includes a "Cool-Crown" mesh lining (let's call it "lobster netting," shall we?) that is, in the words of the hang tag, "designed to promote cooling and minimize staining," a leather buckle adjustable sizing strap in back and the word "Maine:" in all caps just above.

Purchased this afternoon at, you might have guessed it, a Luke's Lobster shack. There are several in the city but the one I frequent is on the UWS Their lobster rolls are a simple thing of singular beauty, and I try to avail myself of one whenever I'm here.

I might've actually cracked two claws with one stone in this situation. While I was waiting for our lunch lobstys to be made I chatted up the guy behind the counter whose name is Storr. I told him about the Project (in all honesty I was hoping he'd let me do a courtesy snap, drop and lobster roll) and then explained that I had a rather large sombrero I needed to secrete somewhere in the city.

Storr offered to take it off my hands, explaining that all employees are required to wear hats and it would serve as a wide-brimmed velvet letter (so-to-speak) for anyone who showed up without the requisite hat.

My aim is to drop it off there tonight before wheels up tomorrow. If all goes according to plan, I'll be able to visit it next NYFW.

Of course if you'd like to visit the sombrero yourself next time you're in NYC -- maybe even take a selfie with it on your head (to send to me, naturally) -- swing by 426 Amsterdam between 80th and 81st and ask to borrow it for that purpose.

It'd seriously make me laugh my lobster tail off.