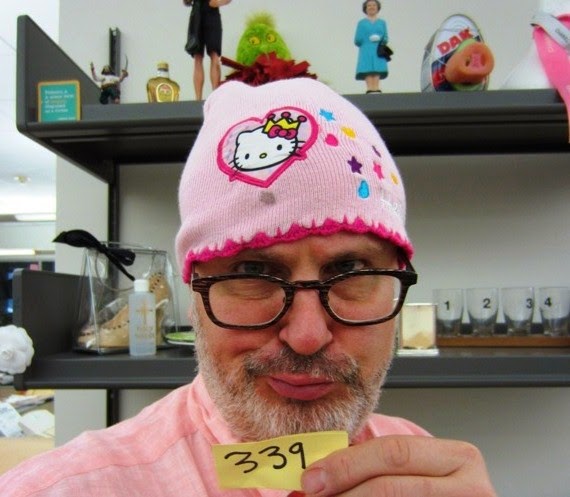 There are two interior tags. The bottom one reads: "100% acrylic, exclusive of decoration, made in China," the top one reads "Hello Kitty by Sanrio, used under license, manufactured by Berkshire Fashions Inc." on the back and "Princess Hello Kitty, only at Macy's" on the front The princess part explains the crown and the overall air of feline royalty this cap exudes.

Graciously loaned to the Project by Marilyn and plucked almost purely at random from the MRBOH.

FYI, the green stuffed Grinch (another Seussian flourish) looming over the top of the cap is not part of it - nor is the red shredded floral thingy between said Grinch and the top of the hat. Their appearance is totally random. Sharp-eyed readers might be able to spot all kinds of other random things on the shelf behind me that seem like they should be INSIDE my head rather than outside.

What can you spy with your little eye?