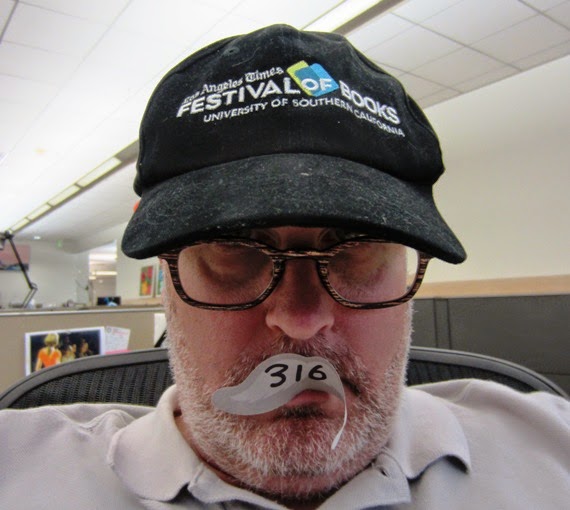 A promo cap for the upcoming, you guessed it, Los Angeles Times Festival of Books, (taking place this weekend -- Saturday April 12 and Sunday 13 -- on the USC campus in downtown L.A.) graciously loaned to the Project by Tracy Boucher. It's actually been sitting on the corner of my desk and I figured if I didn't post it today pretty soon I'd be flipping the page and the opportunity would be gone.

As someone who spent his growing up years NIB (Nose In Book), I always enjoy the FOB. Last year I caught a panel discussion on single-subject obsessions like duck stamps, tacos and the race to build the world's most complicated watch (which I wrote about here), the year before that I sat in on a talk with children's author Judy Blume (recapped in "Are you there Judy Blume? It's us, your fan base").

Shameless plug for the mothership? Yeah, I suppose so. But I'll tip my hat (and anyone else's for that matter) for any book-centric event.

Related:
PC 315: ART in RTH
PC 314: Sly TurkPC 313: Naughty LambQ: OK, nice hat -- but what exactly is Project Cubbins, anyway?
A: One man's homage to Dr. Seuss and his second book, "The 500 Hats of Bartholemew Cubbins," which is celebrating the 75th anniversary of its publication in 2013, Project Cubbins is an attempt to document the wearing of a different hat or piece of headgear every day for 500 consecutive days. No do-aheads, no banking of hats, no retroactive entries. PC started on May 27, 2013 with Hat 1. Got hats? If you loan 'em, you'll get e'm back safe and sound!
Posted by Adam Tschorn at 3:30 PM