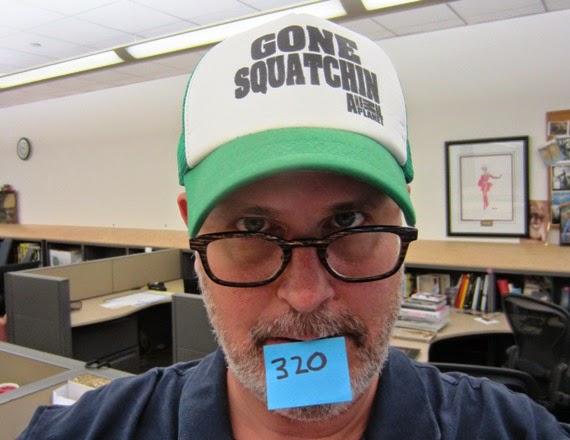 Day 320 / Hat 320: Trucker-style cap with green mesh back, white foam front and green bill. Black screen printing on front reads: "Gone Squatchin," with the logo of the Animal Planet logo below and to the right (but, curiously, without the final apostrophe). Interior tag reads: "65% percent cotton, 35% nylon, one size fits all, made in China, RN 129231."

Borrowed for the Project from the between-desk-divider in close proximity to Calender section compatriot Chris Lee who told me: "It's nominally my hat, it's actually more Amy Kauffman's - she wears it more than I do." Lee explained that the hat was part of a promo for the Animal Planet show "Finding Bigfoot."

A little interweb sleuthing turns up this civilian version (sans logo) available through the Animal Planet online store. And that's not all, other offerings include T-shirts ("Keep Calm and Squatch On") and a set of four drinking glasses -- because you'll never truly find Bigfoot unless you start your hunt at the bottom of a pint glass.

And maybe, just maybe, when the finally find Sasquatch they'll discover he has custody of that missing apostrophe. Until then we're gonna loan one of our own -- and go Squatchin'.

Related:
PC 319: Claiborne Cowboy
PC 318: Tarnish Up TopPC 317: Closet SOBQ: OK, nice hat -- but what exactly is Project Cubbins, anyway?
A: One man's homage to Dr. Seuss and his second book, "The 500 Hats of Bartholemew Cubbins," which is celebrating the 75th anniversary of its publication in 2013, Project Cubbins is an attempt to document the wearing of a different hat or piece of headgear every day for 500 consecutive days. No do-aheads, no banking of hats, no retroactive entries. PC started on May 27, 2013 with Hat 1.