Project Cubbins: Hat 321 - The Silent T is for Tiara Edition 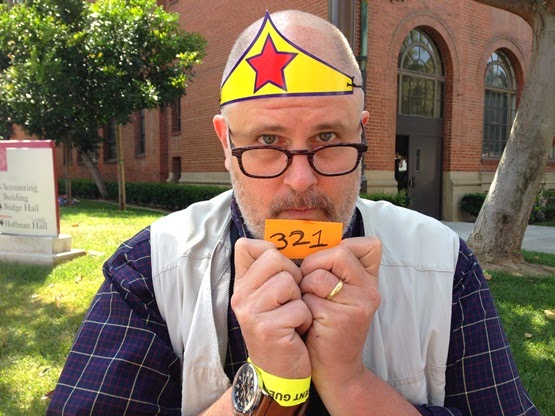 Graciously loaned to the Project by publicist Alaine Azcona on site at the Los Angeles Times Festival of Books. Of its provenance she says: "I don't know what [exhibitor] booth it was from, all I now is that ther were a bunch of girls in Batman T-shirts handing them out." (If that doesn't sound like the fulfillment of a dying comic book geek's last wish I don't know what does ...)

It is of course, meant to emulate the distinctive tiara worn by Wonder Woman, described as follows in a D.C. Comics wiki entry on the headpiece:


"All variations of Wonder Woman throughout the Multiverse wear a small, golden (or occasionally silver) tiara adorned with a red star, a symbol of her status as princess of Paradise Island.


The tiara can be used as a throwing weapon, similar to that of a boomerang. With her level of super-human strength Wonder Woman is capable of cutting very durable substances, a prime example being when she cut Superman's throat to temporarily disable him."

So that hat tip goes to Alaine for the gracious loan of the paper tiara (which she literally pulled from her purse to have me place temporarily atop my head).

Related:
PC 320: Gone Squatchin'
PC 319: Claiborne CowboyPC 318: Tarnish Up Top
Q: OK, nice hat -- but what exactly is Project Cubbins, anyway?
A: One man's homage to Dr. Seuss and his second book, "The 500 Hats of Bartholemew Cubbins," which is celebrating the 75th anniversary of its publication in 2013, Project Cubbins is an attempt to document the wearing of a different hat or piece of headgear every day for 500 consecutive days. No do-aheads, no banking of hats, no retroactive entries. PC started on May 27, 2013 with Hat 1.