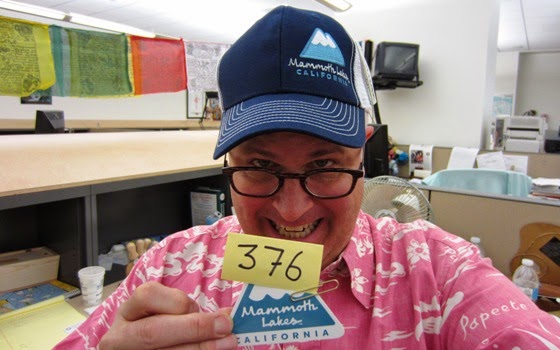 Day 376 / Hat 376: Trucker-style cap with white mesh back and navy blue front. Details include white contrast stitching on bill, adjustable sizing strap in back and light blue and white embroidery on front of snow-capped mountain peaks above the words "Mammoth Lakes, California."

This is an early morning snipe from the cubicle of fellow cube farmer and Travel section colleague Chris Erskine. It was sitting on his cube desk all yesterday along with some stickers and a T-shirt from the Mammoth Lakes folks (based on the accompanying ephemera, apparently sent to promote the VisitMammoth smartphone app for iPhone and Android).

After I'd pointed out the hat, another colleague said: "You should do it. He's on assignment." And since I'm all about doing what I'm told, it was the first thing I did when I alighted in the cube farm this morning.

And yes, I even took the snipe snap (it wasn't technically a stealth snap since no one else was around) right at Erskine's desk.

Q: OK, nice hat -- but what exactly is Project Cubbins, anyway?A: One man's homage to Dr. Seuss and his second book, "The 500 Hats of Bartholemew Cubbins," which celebrated the 75th anniversary of its publication in 2013, Project Cubbins is an attempt to document the wearing of a different hat or piece of headgear every day for 500 consecutive days. No do-aheads, no banking of hats, no retroactive entries. PC started on May 27, 2013 with Hat 1.
Posted by Adam Tschorn at 9:11 AM