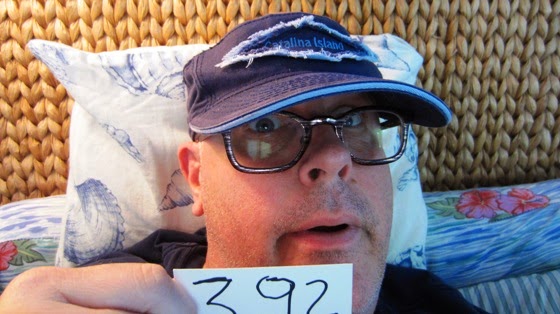 Purchased from the UTB (that stands for "Up the Block," btw) Goodwill store for the princely sum of $2.99.

Despite having lived in So Cal for nearly 18 years, I'm ashamed to say I have never been to Santa Catalina Island which lies just  off the coast of Southern California directly west of San Clemente and is, according to the Wikipedia entry, 22 miles long and about eight miles wide at its widest point.

A few interesting bit of trivia: In the 1920s, it was no other than chewing gum magnate (you don't hear that phrase very often) William Wrigley who developed the island for tourism, and it was just off the island's village of Two Harbors that actress Natalie Wood drowned after falling off a yacht in suspicious circumstances in 1981.

Related:
PC 292: Rando & Ribbon
PC 92: Hombre in an ombré
A Year Ago Today in Project Cubbins

A: One man's homage to Dr. Seuss and his second book, "The 500 Hats of Bartholemew Cubbins," which celebrated the 75th anniversary of its publication in 2013, Project Cubbins is an attempt to document the wearing of a different hat or piece of headgear every day for 500 consecutive days. No do-aheads, no banking of hats, no retroactive entries. PC started on May 27, 2013 with Hat 1.
Posted by Adam Tschorn at 12:31 PM