Project Cubbins: Hat 399 - In a Bit of a Stewie Edition 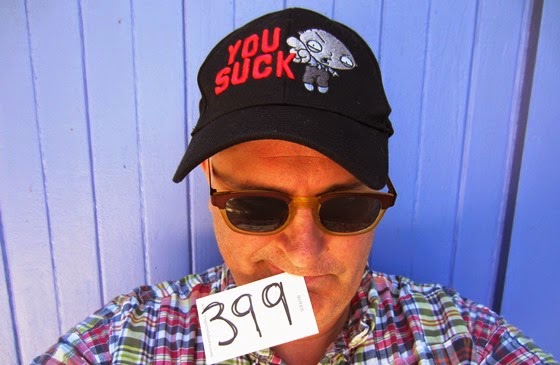 Day 399 / Hat 399: Black, baseball-style cap with red embroidery on front that reads: "you suck" in all capital letters next to an embroidered image (in shades of gray) of a finger-pointing Stewie Griffin.

Additional details include interior seam taping printed with the same pronouncement (also in red) along with Stewie's face, and the "Family Guy" logo in red, yellow and blue on the back of the hat.

Plucked for today's installment from my personal headgear holdings, this in-your-face hat originally came into my possession from sister-in-law Kathleen (who used to work at Fox) along with some assorted other FG goodies that technically were supposed to find their way to my nephew but failed to escape the specific gravity of the Garlodge.

Oh, and don't worry, Project Cubbins readers, despite what it says u there on the front of the hat, you're totally cool with me.

A: One man's homage to Dr. Seuss and his second book, "The 500 Hats of Bartholemew Cubbins," which celebrated the 75th anniversary of its publication in 2013, Project Cubbins is an attempt to document the wearing of a different hat or piece of headgear every day for 500 consecutive days. No do-aheads, no banking of hats, no retroactive entries. PC started on May 27, 2013 with Hat 1.
Posted by Adam Tschorn at 3:01 PM