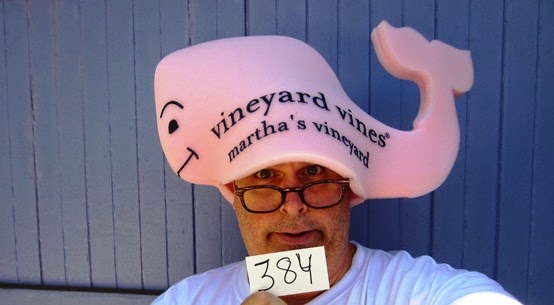 Day 384 / Hat 384: Pink foam whale measuring 25 inches from nose to tip of tail (accounting for the curve) and 11 inches tall, with black screenprinting that reads: Vineyard Vines®, Martha's Vineyard." Additional detail includes smiling face, eyes and eyebrows (though honestly, why would a whale need eyebrows? Except maybe to look at least 37% less freaky when viewed from head on (see additional photo below.)

This suh-weeeeeet addition to the Project swam all the way to the West Coast courtesy of my sister-in-law (the Bride's sister, not the best man's wife) and I'm going to take a wild guess that it came into her possession through her job at Orvis. (She'll disabuse me of that if she found it out in the wild somewhere.)* 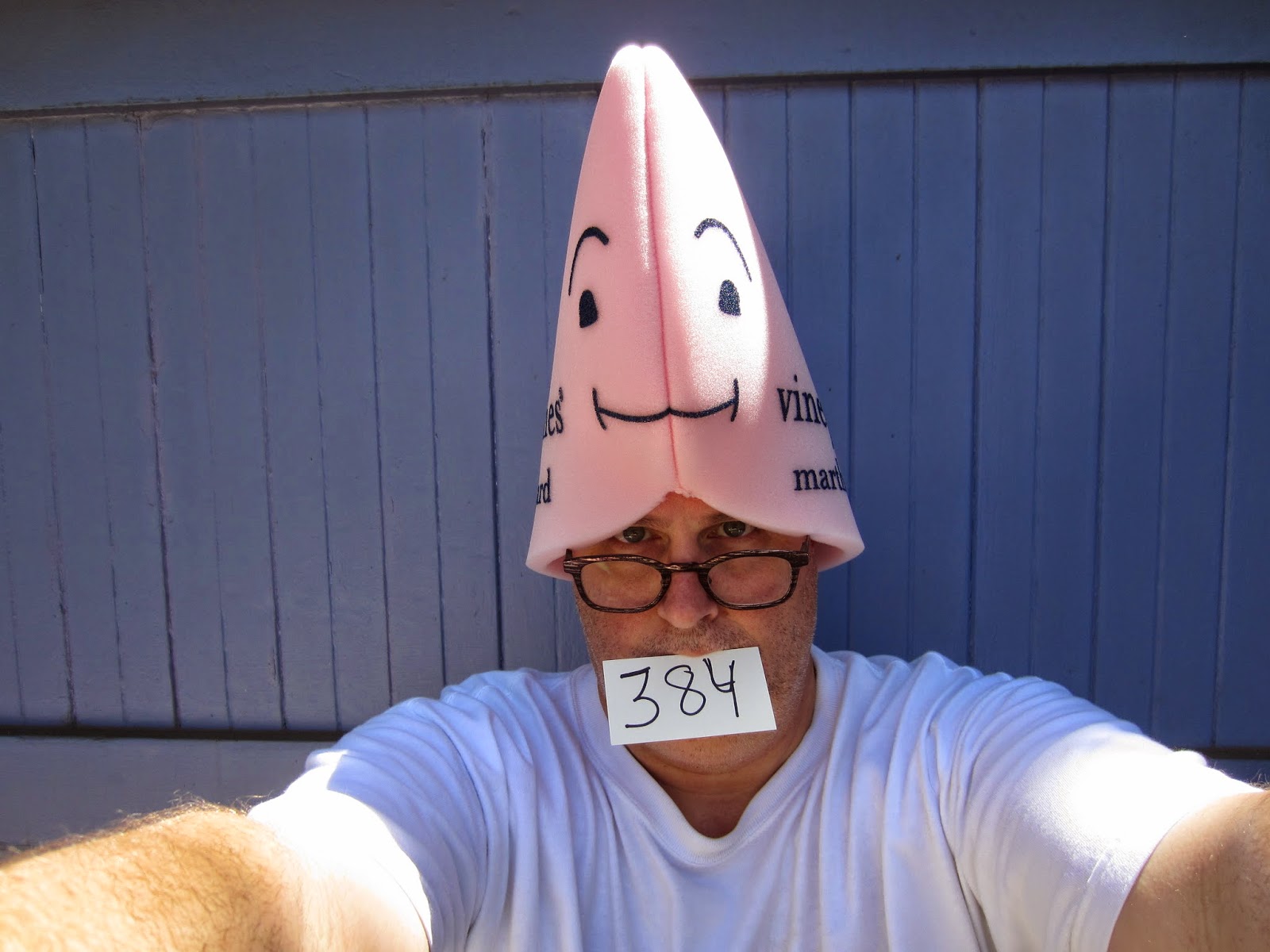 In case you're not familiar with the brand  (whose logo is indeed the eye-browed pink whale), Vineyard Vines was founded in 1998 by brothers Shep and Ian Murray as a necktie business but has since grown into a full apparel and accessories brand for men, women and children.

In a cursory search of the interwebs I couldn't turn up any details on why the brothers chose the pink whale or if it has a name. When I opened the box (which arrived yesterday) the first thing that crossed my mind was that instead of pink elephants, pink whales must be what Ahab sees when he goes on a real bender.  Som I'mma gonna call him "Ahab."

In case you weren't aware (I'm guessing you weren't) this actually makes the THIRD whale lid in the Project line-up to date. The first (PC 98) showcased Soul Project's "goodwhale ambassador" Don Bueno, the second was a stealth snap at the American Museum of Natural History (PC 111). Why is this significant? Well, as anyone who was in my Donna Disch English class back in high school can tell you, there is a whole lot of number three mojo floating around the book "Moby-Dick; or, The Whale" by Herman Melville. (My paper on the subject was, if I recall correctly: "A Supposition as to the Occurrence of the Number Three in "Moby Dick.")

At any rate, I digress. A sincere hat-tip for 'Thleen for harpooning this bad boy for me.

*(Update, 3:12 p.m.: Consider me disabused. 'Thleen actually did find it out in the wild. She says they were giving them away outside the store in Manchester. "You know I had to pull over," she says. Yeah, you did.)

A: One man's homage to Dr. Seuss and his second book, "The 500 Hats of Bartholemew Cubbins," which celebrated the 75th anniversary of its publication in 2013, Project Cubbins is an attempt to document the wearing of a different hat or piece of headgear every day for 500 consecutive days. No do-aheads, no banking of hats, no retroactive entries. PC started on May 27, 2013 with Hat 1.
Posted by Adam Tschorn at 3:05 PM