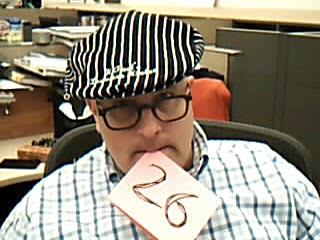 Day Twenty-Six / Hat Twenty-Six: Black newsboy-style cap with white stripes and snap that secures front
of hat to brim. White embroidery in front reads" "K Paul's Louisiana Kitchen." This rarity from the NC series has a cool back story.

Noelle (in case you missed the beginning of the NC series, there are all hats loaned to Project Cubbins by bacon- and hat-loving co-worker, chef and test kitchen director Noelle Carter) says this hat was one of two issued to her when she started working for Chef Paul Prudhomme in New Orleans about a decade ago.

"Everybody was issued two of these hats when they started working there," she told me, "and you got to keep one when you left."

Her keepsake kitchen cap from her days in the Big Easy is the one pictured here.

"It probably still has the smell of fry oil on it," she says. Actually it doesn't - but just putting it on my head  does conjure up all kinds of memories from a trip to the Crescent City a year ago Memorial Day weekend with the bride and sister-in-law for our friend's wedding (the hat acquired on that trip will eventually make a showing).


Related:
Project Cubbins: Hat Twenty-Five
Super Nola: Insider's tour of New Orleans
Stews: When time is on your side, taste will be too