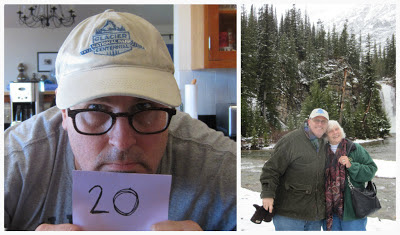 Day 20 / Hat Twenty: Khaki-colored 100% cotton baseball-style cap with blue and white embroidered logo that reads: "Glacier National Park Centennial" with the year 1910 on the left and the year 2010 on the right. Embroidered in blue on the back of the hat are the words "Celebrate Inspire Engage."

As you might have guessed, I purchased this hat during a 2010 trip to Glacier National Park. I went on the trip over Memorial Day Weekend with my dear, sainted mother Nancy -- who had worked a couple of summers there a half-century earlier and had long regaled me with tales of Edward R. Murrow sitting in the kitchen eating a trout he'd caught earlier that day, or how Marilyn Monroe once got kicked out of the dining room for wearing pants.

The photo on the right is of the two of us (and the hat!) taken during that trip. It was the first weekend f the season that the park was open, and as you can see, it was still winter all around us.

We had a lot of fun on that trip -- and I even photo-bombed some goats.(as evidenced below). 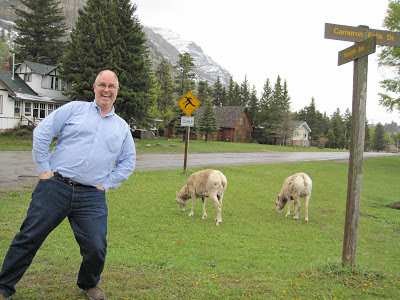