Day Twenty-Two / Hat Twenty-Two: Black, snapback trucker-style hat with "The  10" in green embroidery Sisters of Los Angeles on the front and SO LA in gray on the back just behind the left ear. It's from a relatively new line called (abbreviated SO LA, which is kind of meta since that's "so L.A.") that started out riffing on some of SoCal's most memorable memes through hats, candles, glassware and the like but has since expanded into other cities (including Atlanta, Chicago and Miami). 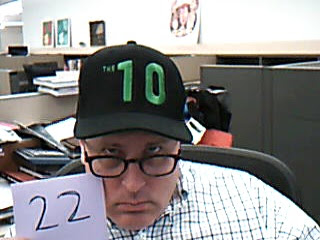 If you're drawing a blank at the significance of "The 10" on the hat then you've 1) Spent absolutely no time at all in the City of Angels, and 2) Never seen the drop-dead hilarious "The Californians" sketch on "Saturday Night Live" which parodies (but not by very much) Angelenos' fascination with getting "from the 101 to the 405 on the 10," or something to that affect. (Personally, I prefer to take the  101 past the Chesebro Road exit to the 405 in Sherman Oaks).

Hang on friends and family in the Green Mountain State, at the rate the Sisters of Los Angeles are growing, I wouldn't be surprised to see 802 rocks glasses in time for some holiday nog, and hats emblazoned with "New 7" and "Historic 7A" before snowplows are needed to clear either.

And I think I know just the place that should sell them.