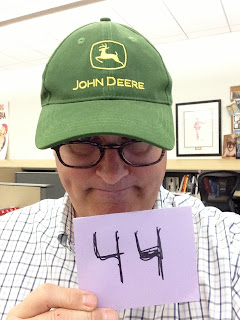 Day Forty-Four / Hat Forty-Four: Green 100% cotton baseball-style cap with yellow and green embroidered John Deere logo and name (on front) and the slogan: "Nothing Runs Like a Deere" in yellow embroidery on the back. Another hat in the fruitful NC series.

The John Deere company make a lot of hay with its roots in the Midwest as evidenced by this timeline entry at its website: "1837 John Deere fashions a polished-steel plow in his Grand Detour, Illinois, blacksmith shop that lets pioneer farmers cut clean furrows through sticky Midwest prairie soil."

But any good Vermonter (a goodly number of transplants) know that inventor John Deere was not only born in the Green Mountain State (in Rutland in 1804), but learned the blacksmith trade in Middlebury "as an apprentice in the shop of Capt. Benjamin Lawrence from 1821 to 1825," as the Vermont Board of Historic Sites marker currently in place puts it.

As the marker also states: "In 1836 Deere removed to Grand Detour, Illinois where, in 1837, he built the world's first steel moldboard plow."

Anyone who had tended the rock garden that is Vermont's unforgiving soil will probably agree that while "the Plow That Broke the Plains" may have been invented in Illinois, the seeds for it were almost certainly sown back in Vermont.