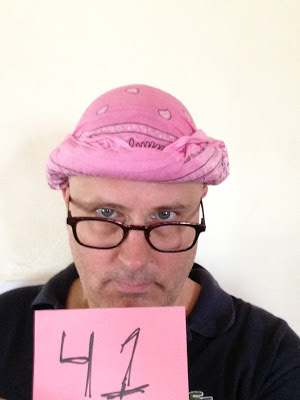 The bandana's use as what's colloquially referred to as a "do-rag" was inspired by Peter Stigter, one of the photographers I got to know while covering the men's European runway shows, and who was rarely seen (in the summer months anyway) without something similar atop his head. (There's a good shot of him in just such a do-rag at his website here.)

Did you know that etymologically, it's the colors and spots that make it a bandana (also frequently spelled "bandanna")? That's what the Online Etymology Dictionary says anyway: "from Hindi bandhnu, a method of dyeing, from Sanskrit badhnati "binds" (because the cloth is tied like modern tie-dye)."

This particular bandana came from the 2011 Tommy Hilfiger Prep World pop-up at the Grove.That it perfectly matches my hat number index card is coincidence.