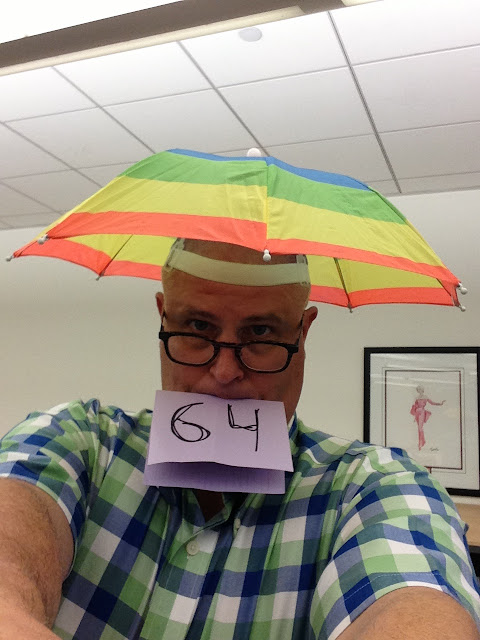 Day Sixty-Four / Hat Sixty-Four: Rainbow-colored umbrella hat with white elastic headband inside. I'm going to come right out and say this is my absolute favorite hat to date. Not just because it's a colorful, unique addition to the Project, but because of its provenance.

This hat was hand-delivered to the Cube Farm last Friday from Beijing, China, where it was purchased by Grace, the daughter of my Travel Section colleague Chris Reynolds. "Everybody who is anybody is wearing these, especially in Beijing," Reynolds tells me. "Grace bought this right on Tianamen Square outside the Forbidden City." According to Reynolds, the price of the rainbow lid was 10 Chinese yuan, with the current exchange rate being somewhere in the neighborhood of six Yuan to one U.S. dollar.

This thing has such a wide wingspan it was almost beyond my selfie-taking abilities. I did eventually manage to shoot myself and provide you all with some meaty forearms and my favorite new Orvis shirt at the same time.

A sincere tip o' the festive and fantastical umbrella hat to Grace (who can rest assured that the hat in question has, indeed, been safely repatriated to her father's desk).