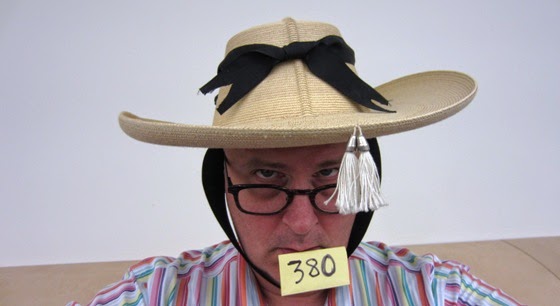 Day 380 / Hat 380: Braided plant fiber sombrero with 4 1/2 inch brim, slighlty tapered four inch crown and raised ridge front to back along the crown (about the diameter of a number 2 pencil) with a black grosgrain ribbon tied in a bow on front of crown. It is threaded through two grommets on the crown to become a chinstrap of sorts. Additional detail includes a pair of crimped metal and thread tassels hanging off the front brim of the sombrero. 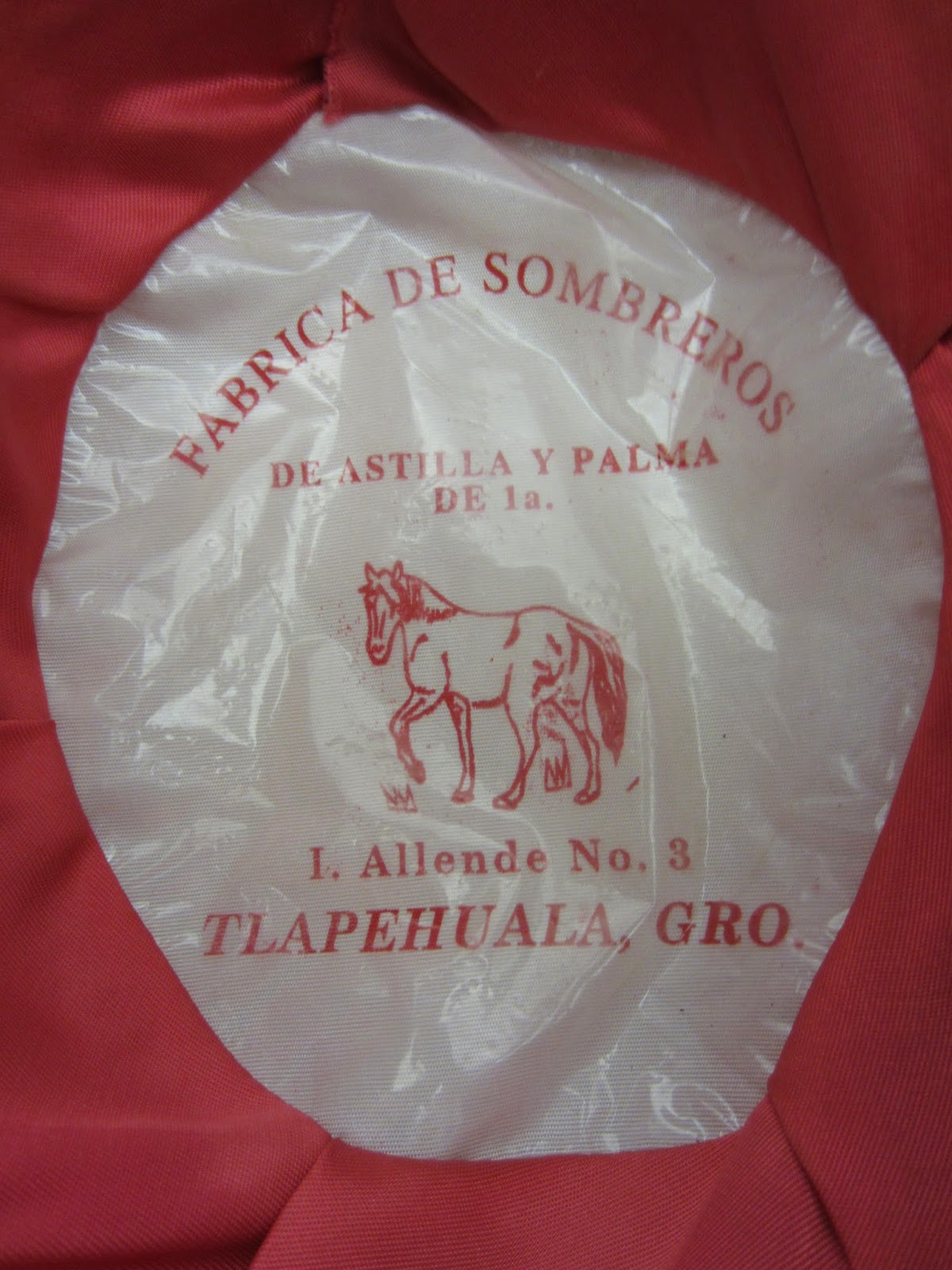 Interior of crown is lined in a red, lightweight silk-like material and sweatband is a red faux leather material. The inside top of the crown depicts a line drawing of a horse in red against a white background and the following in red lettering: "Fabrica de Sombreros, de Astilla y Palma de 1a., I. Allende No. 3, Tlapehuala, Gro."

Sine my Spanish is rusty to non-existent, I turned to Google Translate to help me parse the lid legend. It goes
something like this: "Hats Factory, Splinter and Palma" (which perhaps means it's made of wood and palm fibers but that's just a guess). Tlapehuala is a city in the state of Guerrero in southwestern Mexico.

Based on a little more digging, it turns out the braided palm fiber hats of Tlapehuala have quite a reputation for quality -- akin to the Panama hat. (Here's an 2007 article from the newspaper La Jornada Guerrero that roughly translates to "The Tlapehuala hat: between folk art and artwork." (Elsewhere I found the city referred to as "the undisputed center of local hat making.")

This is the Project's sombrero cuatro, and it joins such delightful installments as the Deadline Sombrero (PC 229), the Poquito Sombrero (PC 242) and the ultra-swanky green velvet "dress" sombrero (PC 139).

This is the penultimate loaner plucked from the MRBOH, so MR gets the hat tip.

A: One man's homage to Dr. Seuss and his second book, "The 500 Hats of Bartholemew Cubbins," which celebrated the 75th anniversary of its publication in 2013, Project Cubbins is an attempt to document the wearing of a different hat or piece of headgear every day for 500 consecutive days. No do-aheads, no banking of hats, no retroactive entries. PC started on May 27, 2013 with Hat 1.
Posted by Adam Tschorn at 9:46 AM

Whats is this hat's worth?