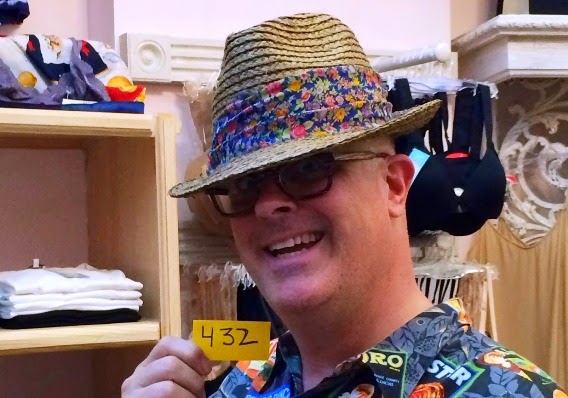 Day 432 / Hat 432: woven raffia fedora with floral hatband detail by Hat Attack.  Stealth-snapped this afternoon at Pickett Fences on Larchmont Boulevard. Shortly after the snap, I spotted the below on the sandwich board outside the nearby Goorin Brothers hat shop. Partial to word wordplay, I'm practically powerless against hat-related word play.

And with that, a happy Friday to all, and to all a good night!

A Year Ago Today in Project Cubbins

A: One man's homage to Dr. Seuss and his second book, "The 500 Hats of Bartholemew Cubbins," which celebrated the 75th anniversary of its publication in 2013, Project Cubbins is an attempt to document the wearing of a different hat or piece of headgear every day for 500 consecutive days. No do-aheads, no banking of hats, no retroactive entries. PC started on May 27, 2013 with Hat 1.
Posted by Adam Tschorn at 7:39 PM