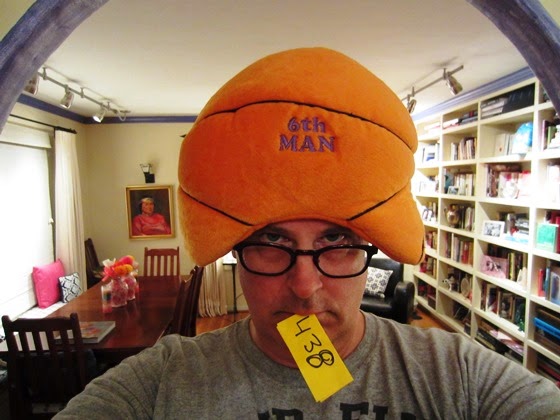 Day 438 / Hat 438: Orange, puffy, basketball-shaped helmet with "6th Man" embroidered on back in purple and the Los Angeles Lakers logo in purple and gold on front (I'm wearing this backward, obvi.) Interior label reads: "Team Heads" on one side and "surface wash only, , all new material , made in Indonesia, ages 3  years and up (materials consist of polyester fiber)."

Hard to believe that this Lakers-related lid -- from my own hat stash - hasn't been featured in the Project yet. I'be had plenty of Lakers headgear and even a different basketball-shaped helmet (back at PC 223 -- who knew these were a thing) but damned if this one somehow escaped my grasp. I would've saved it for the start of the season but Seuss willing I'll have this game in the refrigerator( as Chick Hearn used to say) long before the first ball drops on the 2014-2015 season.

The Sixth Man, for those of you not fluent in basketball, is a player who isn't part of the starting lineup but is the guy who is first to be substituted off the bench and, more often than not is a talented utility player who is often relied upon. (It's a bit more nuanced, you can read a bit more about the Sixth Man at the Wikipedia entry.)

I tip my bulbous orange hat to all sixth men wherever they may be tonight. You know who you are anfd you know what you do.