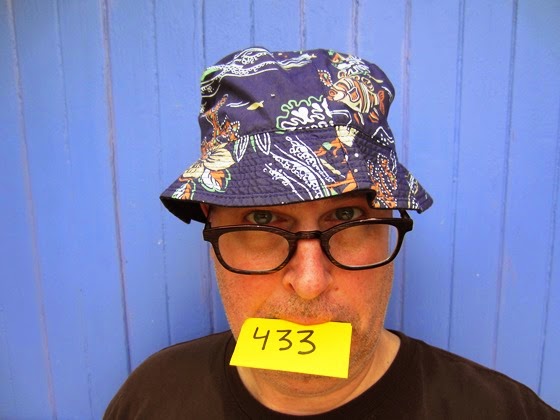 Day 432 / Hat 432: Blue aloha print bucket hat with blue tag on exterior that reads"Polo" in white. Interior is solid blue and well-finished which probably makes it a kind of reversible bucket but for the much larger tag there (also blue with white lettering) that reads: "Polo by Ralph Lauren, made in Taiwan, 00% cotton, medium, RN 41331."

This lid was lifted from the Bride's headgear archive which somehow still has hats left to give. The aloha print reminds me of a segment I heard on my local NPR station recently about India's first female surfer Ishita Malayvia who was bringing So Cal style surf culture to India. (Here's a link to the story on PRI's The World -- it's a fascinating listen and just five minutes long.)

After commenting on her use of surf speak like "stoked," the interviewer asked her if she'd added any phrases to the lexicon. She promptly responded with a word she and a friend had coined that combined "namaste" with "aloha": "namaloha." "They both meant the same thing," Malayvia said.

As a fan of both concepts, I heartily approve.

A: One man's homage to Dr. Seuss and his second book, "The 500 Hats of Bartholemew Cubbins," which celebrated the 75th anniversary of its publication in 2013, Project Cubbins is an attempt to document the wearing of a different hat or piece of headgear every day for 500 consecutive days. No do-aheads, no banking of hats, no retroactive entries. PC started on May 27, 2013 with Hat 1.
Posted by Adam Tschorn at 3:32 PM