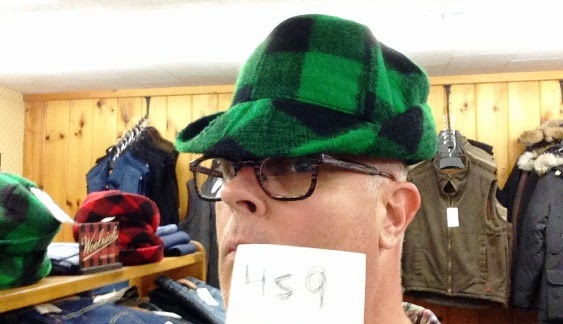 Stealth-snapped at Heinel's Clothiers in Manchester, Vermont, while the Bride was purchasing some Woolrich shirts. Heinel's has been an institution around these parts since John C. Heinel  opened a tailor shop in what was then known as Factory Point Square in 1879. (For more information, here's a link to the store's Facebook page.)

If I'm not mistaken, I may have bought some tartan formalwear business here for SVAC's Scottish Winter Ball back in 1996 - which would have marked the first official event the Bride and I attended together in our pre-wedded days.

That place is jammed full of Adam-appropriate hats and I'll most likely be adding to my permanent collection from their holdings before the visit is over.

A: One man's homage to Dr. Seuss and his second book, "The 500 Hats of Bartholemew Cubbins," which celebrated the 75th anniversary of its publication in 2013, Project Cubbins is an attempt to document the wearing of a different hat or piece of headgear every day for 500 consecutive days. No do-aheads, no banking of hats, no retroactive entries. PC started on May 27, 2013 with Hat 1.
Posted by Adam Tschorn at 2:22 PM