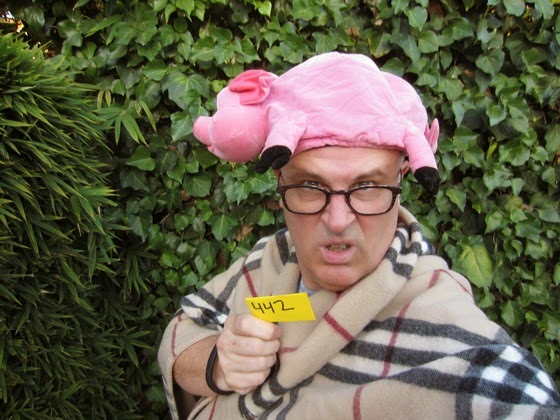 The third animal-themed hat from the DSAOH, I tried to take today's photo up a notch on the humor scale by accessorizing with a Burberry blanket (Go ahead, you can do it ... Say it out loud ...) to in some cosmic way try to offset the extremely sad news today that one of the funniest men on Earth -- Robin Williams -- has passed away at the age of 63.

He brought me and my family -- especially my brother Al -- a great deal of laughter. I especially remember the year I received the 1979 album (they were big old vinyl things back then) "Reality ... What a Concept," which we preceded to play at full blast. When Williams' call and response in the New York echo bit ricocheted off the walls of our tiny upstairs and down the stairs my parents went white-as-a-sheet apoplectic.

The hat tip goes to Dianna for entry three, but a very special, heartfelt executive hat-tip to the late, great Robin Williams. We shan't see the likes of ye again any time soon.

A: One man's homage to Dr. Seuss and his second book, "The 500 Hats of Bartholemew Cubbins," which celebrated the 75th anniversary of its publication in 2013, Project Cubbins is an attempt to document the wearing of a different hat or piece of headgear every day for 500 consecutive days. No do-aheads, no banking of hats, no retroactive entries. PC started on May 27, 2013 with Hat 1.
Posted by Adam Tschorn at 7:28 PM