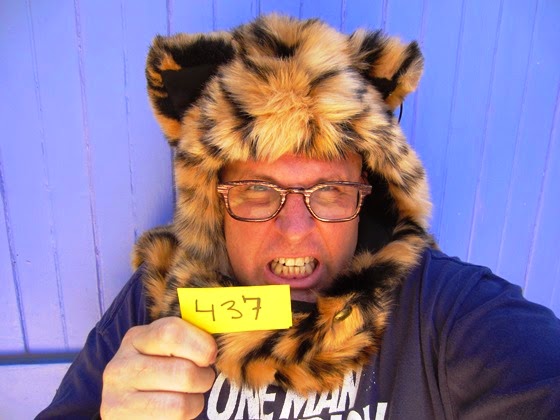 This is the second SpiritHoods creation I've featured in the Project (the first was Brown Bear way back at PC 4) and like that one, this was a Christmas gift from sister-in-law 'Thleen. (The Bride was the Tiger, I was the bear -- oh my!)

The photo kind of makes me laugh for two reasons. First I took the photo outside with the sun full overhead so there's some light bouncing off the driveway that's giving me a real golden glow. Second, I realize I'm wearing my "One-Man Wolf Pack" T-shirt which is kind of mixing critters, no?

A: One man's homage to Dr. Seuss and his second book, "The 500 Hats of Bartholemew Cubbins," which celebrated the 75th anniversary of its publication in 2013, Project Cubbins is an attempt to document the wearing of a different hat or piece of headgear every day for 500 consecutive days. No do-aheads, no banking of hats, no retroactive entries. PC started on May 27, 2013 with Hat 1.
Posted by Adam Tschorn at 5:52 PM