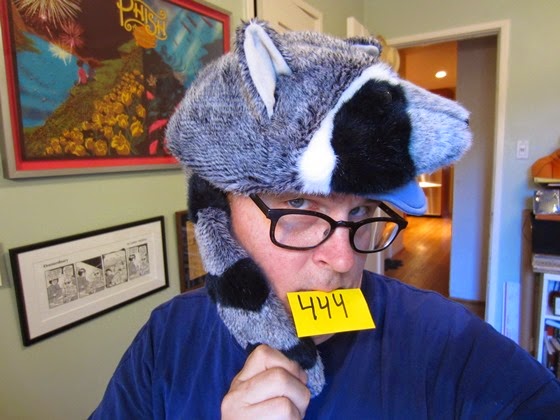 Like the previous entries plucked from the DSAOH, this one is devoid of any kind of label or tag.

Surprisingly, given how much I detest procyon locor (they're nothing more than rats wearing warpaint and pinstripes in my book) this is not my first raccoon-related lid. There's PC 133 (my childhood coonskin cap) for one and a miniature version of same back at PC 86 for another.

But if  there's any spokes-raccoon that can rehabilitate the animal's image it's Rocket Raccoon the feisty critter voiced by Bradley Cooper in "Guardians of the Galaxy." Now if I only had a man-shaped tree named Groot as a co-pilot I'd be all set.

A: One man's homage to Dr. Seuss and his second book, "The 500 Hats of Bartholemew Cubbins," which celebrated the 75th anniversary of its publication in 2013, Project Cubbins is an attempt to document the wearing of a different hat or piece of headgear every day for 500 consecutive days. No do-aheads, no banking of hats, no retroactive entries. PC started on May 27, 2013 with Hat 1.
Posted by Adam Tschorn at 7:16 PM