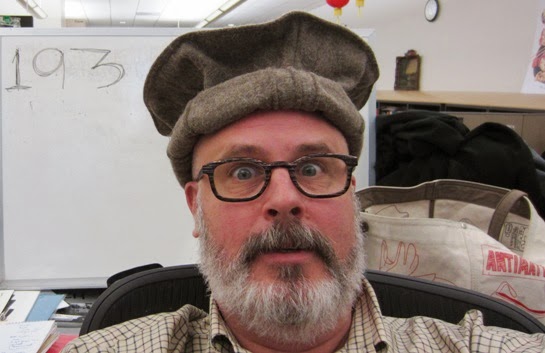 Day 193 / Hat 193: Light brown wool pakol, with interior tag that reads: "Durdana Khan Cap House" Shop #1, Bazar Islamabad Peshawar City." This lid from afar was purchased from a vendor in Kabul, Afghanistan, by the brother-in-law of my co-worker Chris Reynolds who generously loaned it to the Project for today's installment.

"My brother-in-law could tell you what he was doing in Afghanistan, but then he’d have to kill you," says Reynolds (which means he's likely an insurance agent or something along those lines).

I'd never heard of a pakol before so I did a little searching. Among the things I discovered: Before beng fitted, the hat resembles a bag with a flat, round bottom. The sides are then rolled up to form the rounded brim of the hat. The Wikipedia entry says " It is seen as a hat of the Afghans including the Pashtuns, but also of other ethnic groups of the Hindukush mountain range such as Chitralis, Nuristanis and Shamaliwals of Afghanistan."

A nifty feature of the pakol is that, in cold weather, the sides can be rolled down to cover the ears.

Today's tip o' the pakol goes to Chris Reynolds for the loan of the lid - and the lesson!

OK, nice hat -- but what exactly is Project Cubbins, anyway?
A: One man's homage to Dr. Seuss and his second book, "The 500 Hats of Bartholemew Cubbins," which is celebrating the 75th anniversary of its publication in 2013, Project Cubbins is an attempt to document the wearing of a different hat or piece of headgear every day for 500 consecutive days. No do-aheads, no banking of hats, no retroactive entries. PC started on May 27, 2013 with Hat 1. Got hats? If you loan 'em, you'll get e'm back safe and sound!
Posted by Adam Tschorn at 10:51 AM