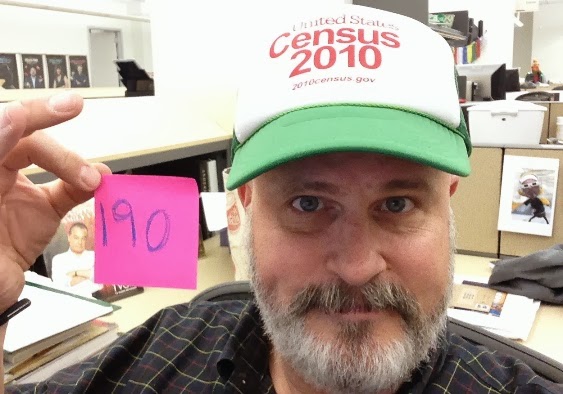 On loan to the Project from Team Boucher. Tracy says this hat came into the family's possession during a trip to Florida back in the 2010 Census days. If I recall correctly (you'll have to excuse the slight case of vacation brain), Tracy's mother-in-law was a U.S. Census volunteer and the hat comes from her involvement with the effort.

OK, nice hat -- but what exactly is Project Cubbins, anyway?
A: One man's homage to Dr. Seuss and his second book, "The 500 Hats of Bartholemew Cubbins," which is celebrating the 75th anniversary of its publication in 2013, Project Cubbins is an attempt to document the wearing of a different hat or piece of headgear every day for 500 consecutive days. No do-aheads, no banking of hats, no retroactive entries. PC started on May 27, 2013 with Hat 1. Got hats? If you loan 'em, you'll get e'm back safe and sound!
Posted by Adam Tschorn at 9:43 AM