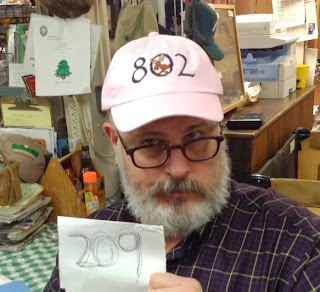 Day 209 / Hat 209: Pink baseball-style cap with black embroidery that reads "802" with brown embroidered moose detail in the middle of the "0."

For those of you unfamiliar with such things (I swear I've mentioned it in prior posts but looking back I see no evidence) 802 is the area code for the Green Mountain State. Yes, that's right --  the entire state.

And, despite there being several moose warning signs along the various and sundry byways of this southern stretch of the 802, I have never, in all my years here, actually seen a moose on the loose.

This was kindly snapped at the Wayside Country Store (where you can buy one of these bad boys for $16.99) by Liz Zakrzewski who is one of the store's employees -- and youngest child of a guy I grew up knowing as "Ted the Telephone Guy." (Go back and look at that mouthful of a last name and you'll know why ...)

So today's winter solstice hat tip goes to the Wayside -- with an assist to Liz!