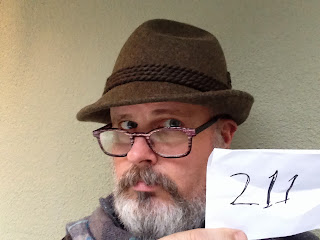 Day 211 / Hat 211:   Green, 100% loden wool Bavarian Tyrol hat with three-dent crown, two-inch brim Lodenhut.
folded up in the back and down in the front and braided cord hat band detail. Manufactured by

A pre-Christmas gift to the Project from my sister-in-law who found it at Orvis (here's the store's link), I discovered a couple of things in researching this hat.

First, Lodenhut (according to this description) was founded by one Konrad Stepanak and has been making headgear like this in Germany for some three generations.

Second, there isn't just one kind of Tyrolean hat -- there are several. Long-time readers may remember I featured a "vagabond-style" Tyrolean hat back at PC 02. The narrow brim and dented crown apparently make this the style prevalent in North Tyrol. North Tyrol for anyone who didn't know (I confess, I did not) is part of the Austrian state of Tyrol and according to this Wikipedia entry, borders Salzburg to the east and the Bavarian state of Germany to the north.

This style of hat, the interwebs tell me, is different from those toppers traditionally hailing from South Tyrol which apparently taper to a point on the crown and have a brim the width of a hand (so sayeth the Wikipedia entry on Tyrolean hats). Here's an example of that hat from an 1834 painting titled Knabe mit Tirolerhut und Äffchen (which translates as Boy with Tyrolean hat and monkey).

Sometimes you just can't make this stuff up.

So today's Tyrolean hat-tip goes to 'Thleen who is steadily moving into a hat-donor class all her own.