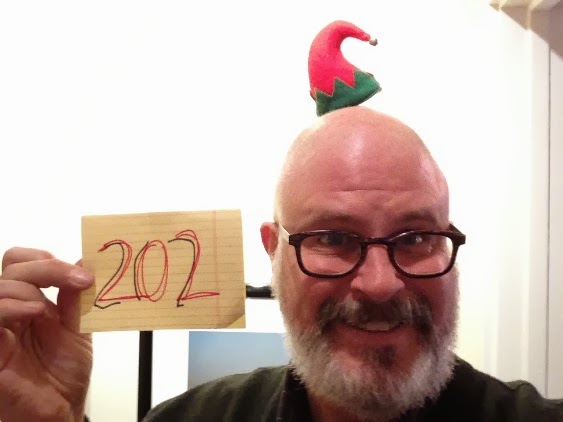 She bought this two Christmases ago at the Claire's after-Christmas sale at the University Mall in South Burlington, Vermont, during a visit with my sister and her family. (We had dinner at Applebee's if I'm not mistaken.)

"Let it never be said that I can't find something to buy in any corner of the world," notes the Bride.

It should be noted that as I lack anything hair-wise for the barrette to clip to, this photo required the use of a quite long -- and painful to remove -- strip of Scotch brand cellophane tape.

Q: OK, nice hat -- but what exactly is Project Cubbins, anyway?
A: One man's homage to Dr. Seuss and his second book, "The 500 Hats of Bartholemew Cubbins," which is celebrating the 75th anniversary of its publication in 2013, Project Cubbins is an attempt to document the wearing of a different hat or piece of headgear every day for 500 consecutive days. No do-aheads, no banking of hats, no retroactive entries. PC started on May 27, 2013 with Hat 1. Got hats? If you loan 'em, you'll get e'm back safe and sound!
Posted by Adam Tschorn at 9:48 AM