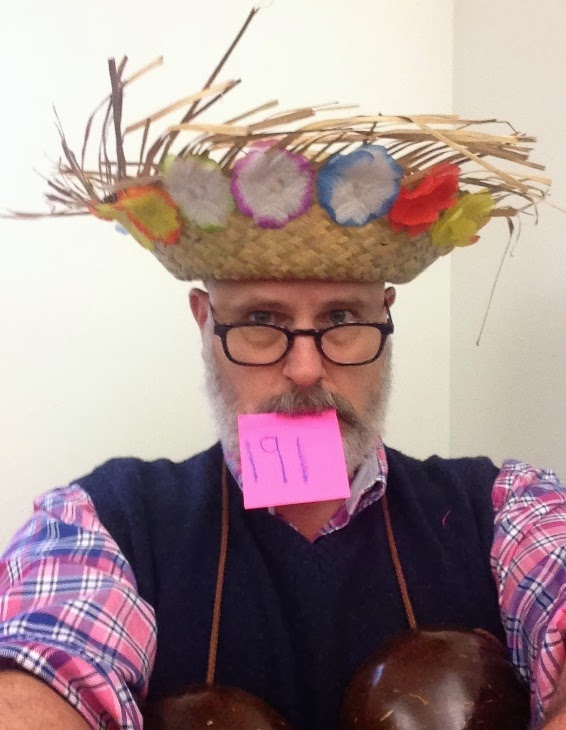 Day 191 / Hat 191: Woven straw hat with multi-colored tropical floral detail around the edge. Attached tag reads: "Hat, one size fits most!" on one side and "Intended for Adult Novelty Use Only," on the other along with details about the company that made it -- Amscan Inc. (the company's website includes the tagline: "The Party People.")

This hat -- along with the coconut bra I'm wearing (look closer) and a pineapple-shaped adult sippy cup were among the items I was recently and quite inexplicably handed by enthusiastic hat wrangler Ingrid Schmidt (who has, by now definitely qualified for platinum-level membership in the MHDC). The girl done gone out and bought the hat for use in the Project!

The ensemble makes me think of one of my favorite things -- Hawaii (well, two if you count "Gilligan's Island") -- and how the Bride and I recently discussed how we'd love to spend at least one Christmas in the former Sandwich Islands.

It would be a Mele Kalikimaka indeed.

PC 190: Makin' Census
PC 189: Elf off the Shelf
PC 188: Yule Yarmulke
OK, nice hat -- but what exactly is Project Cubbins, anyway?
A: One man's homage to Dr. Seuss and his second book, "The 500 Hats of Bartholemew Cubbins," which is celebrating the 75th anniversary of its publication in 2013, Project Cubbins is an attempt to document the wearing of a different hat or piece of headgear every day for 500 consecutive days. No do-aheads, no banking of hats, no retroactive entries. PC started on May 27, 2013 with Hat 1. Got hats? If you loan 'em, you'll get e'm back safe and sound!