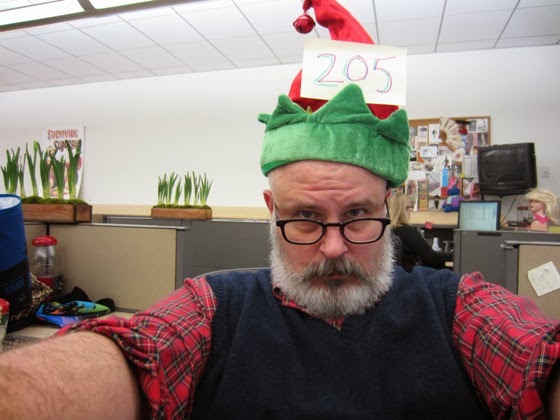 Day 205 / Hat 205: Red and green polyurethane foam Christmas elf cap with red bell and Christmas light details. When a button on the side is pushed, a mechanism inside the cap starts playing the song "Jingle Bells" and the bell-festooned tip of the cap starts flopping back and forth like a beached carp. Interior tag reads: "Dan Dee Collector's Choice, made in China."

I chose this hat (which I believe was originally procured by 'Thleen)  for today since it's the annual  Features section holiday potluck lunch and this treads -- and then quickly crosses -- the festive/annoying line.

Since it's the motion of the millinery that makes this lid so magic, I couldn't resist including a video of it in full flapping glory (the fancy camera work is courtesy of the Bride).

It's embedded below, and if it doesn't put you in the creepy office party holiday mood then I don't know what will.