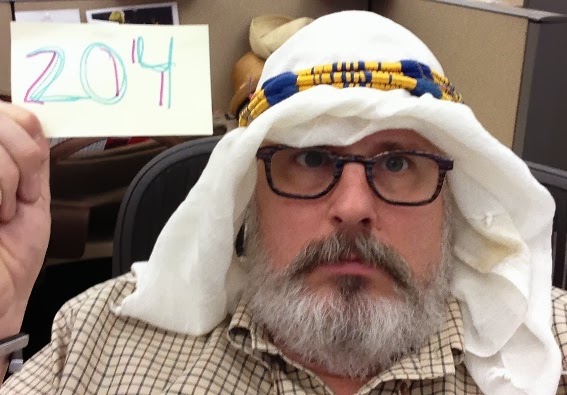 Day 204 / Hat 204: White cotton keffiyeh held in place with a with blue- and gold-colored agal. Perhaps the oldest piece of headgear in my possession, my friend Eve brought it back for me as a memento of her trip to Israel and Egypt in the summer of 1985 after spending a year studying abroad in France (we'd met during my freshman year at UVM).

I've had this special piece of headgear ready for the Project since wearing it on Halloween, and when I heard that Peter O'Toole had passed away on Saturday, I knew it would be an appropriate homage to the"Lawrence of Arabia" star, who could rock the keffiyeh like no other actor before or since.

To tell you the truth, I wasn't actually sure until I started poking around the interwebs  this morning that it was a keffiyeh --  I'd always associated that term with Arafat's distinctively patterned signature number -- but according to the Wikipedia entry for the headdress:

"British Colonel T. E. Lawrence (better known as Lawrence of Arabia) was probably the best-known Western wearer of the keffiyeh. He wore a plain white one with agal during his involvement in the Arab Revolt in World War I."


A little trivia for you: it apparently takes its name from the city of Kufa (currently in modern-day Iraq near Najaf) and alternative names for it (the headdress, not the city) include ghutrah and shemagh.

While today's hat tip goes to my dear friend Eve for the memento from many moons ago, we feel it necessary to momentarily doff our keffiyeh in the memory of the later, great Peter O'Toole.