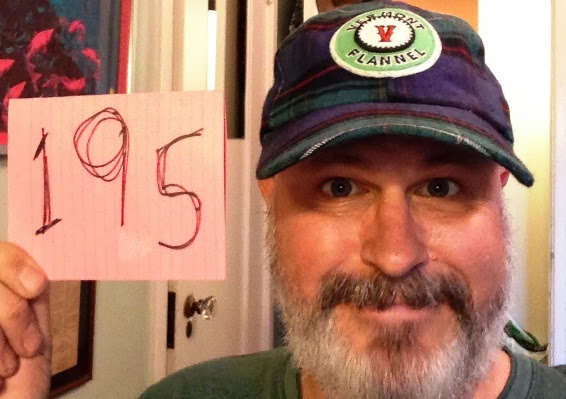 Day 195 / Hat 195: Green and purple flannel baseball-style cap with multicolor fabric patch on front that reads: "Vermont Flannel" with a large letter V. Interior tags read: "The Vermont Flannel Co., Dedicated to world comfort" and "Made in U.S.A, One size fits all."

The Vermont Flannel Company is a family-owned business based in East Barre, Vermont (Barre is pronounced like Manilow's first name, not Roseanne's last name in case you're a flatlander) and have been making their cut-and-sew collection of flannel pants, shirts, scarves pajamas and whatnot there for two decades. Although this particular hat style is not currently listed at the Vermont Flannel Co. website, there are a range of things in the same purple and green plaid (with thin stripes of red and white) pattern dubbed "Vermont."

As a side note, plaid and tartan are often used interchangeably here in the U.S., with the word tartan usually used when referring to a pattern representing a family or Scottish clan. In Scotland  "plaid" refers to an item of clothing and not a pattern (the word "plaid" actually derives from the Gaelic word for blanket.)

This hat was loaned to the project by one Ms. Roberta O'Donnell of Montpelier, Vermont, and is fresh out of the hands of our U.S.P.S. delivery person who dropped it at the doorstep less than an hour ago. It's a pretty well-traveled lid because Roberta was kind enough to offer up the hat to the Project back in August and I was supposed to pick it up from her daughter Kate while I was in NYC for Fashion Week (Kate works near one of the frequent runway show venues). I missed that hat hand-off and Roberta reclaimed the lid in November, took it back to Vermont and finally popped it in the mail.

To not-so-eloquently paraphrase a line from Robert Frost's "Stopping By Woods on a Snowy Evening," this little lid had many miles to go before it sleeps.

So a sincere hat tip to Roberta O'Donnell back in the 802 for today's warm and cozy winter-appropriate lid!


OK, nice hat -- but what exactly is Project Cubbins, anyway?
A: One man's homage to Dr. Seuss and his second book, "The 500 Hats of Bartholemew Cubbins," which is celebrating the 75th anniversary of its publication in 2013, Project Cubbins is an attempt to document the wearing of a different hat or piece of headgear every day for 500 consecutive days. No do-aheads, no banking of hats, no retroactive entries. PC started on May 27, 2013 with Hat 1. Got hats? If you loan 'em, you'll get e'm back safe and sound!
Posted by Adam Tschorn at 4:45 PM