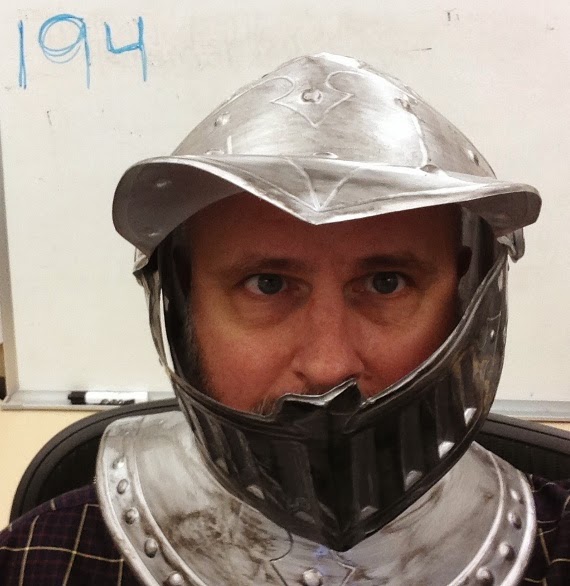 Day 194 / Hat 194: Metallic gray plastic armor helmet with functional visor. The second long-distance loaner from Margaret Waldock whose accompanying note mused that perhaps it was too "costumey" to merit inclusion.

To that   say: "Pshaw!" I have yet to meet a hat too costumey, over-the-top or inappropriate to include in the march to 500 pieces of headgear. (Have you not seen the Carmen Miranda fruit bowl atop my head?)

A little armor-related (as opposed to armor-plated) trivia for you: It's long been contended that the modern-day military salute has its roots in the motion of a knight raising the visor of his helmet. (In fact, until this very moment I held this to be gospel truth.) But the Metropolitan Museum of Art (whose extensive arms and armor collection I spent several hours poring over last I was in NYC) calls that connection "uncertain."

The topic actually merits its own entry on the museum's Arms and Armor—Common Misconceptions and Frequently Asked Questions page which puts forth both the visor theory and a second one that the salute originated during the Roman Republic as a way of showing the right hand did not conceal a weapon.

"Although these theories are compelling (and romantic), there is actually little evidence to support either of them as the direct origin of the modern military salute," notes the museum which hedges its bets by concluding "the truth may lie somewhere in the middle."

But one thing is certain -- that I offer a hale and hearty salute to Ms. Waldock for her contribution to the Project!

A: One man's homage to Dr. Seuss and his second book, "The 500 Hats of Bartholemew Cubbins," which is celebrating the 75th anniversary of its publication in 2013, Project Cubbins is an attempt to document the wearing of a different hat or piece of headgear every day for 500 consecutive days. No do-aheads, no banking of hats, no retroactive entries. PC started on May 27, 2013 with Hat 1.
Got hats? If you loan 'em, you'll get e'm back safe and sound!
Posted by Adam Tschorn at 9:37 AM