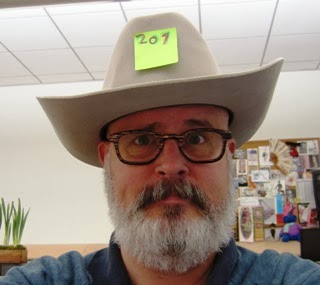 Day 207 / Hat 207: Gray Stetson cowboy hat with gray grosgrain hat band. Interior printing reads: "XXXXXX, Stetson, Made in USA," and size tag reads: "7 1/2." Brim measures approximately 3 1/2 inches and crown is 4 inches from brim to dimple. While I couldn't immediately identify this particular hat on the storied brand's website, I was able to identify the shade of gray -- which Stetson calls "Silverbelly."

This is the second loaner lid from Lisa B. (the first was yesterday's Clone Trooper helmet) and I wanted to make sure I included it in the Project before it got lost in the holiday shuffle.

It is also happens to mark the second Stetson to be featured here -- the first was some 157 hats ago with PC 50 back in July.

All those Xs mean this hat is what's called a "6X." So what does that mean exactly? I wasn't sure until I started digging. Here's what  found at Stetson's FAQ:

A non-Stetson site (which, in all honesty, I happened to like simply because it referred to the the Stetson as "the Cadillac of hats") posits that the Xs were originally a price-point designation and that the mix of animal furs used by the company in its hats over the years has changed so much that it doesn't serve any purpose at all -- other than as a sales gimmick. (You can read the more nuanced discussion here.)

Never mind the Xs, though, today's tip o' the ten-gallon goes, as it did yesterday, to Lisa Boone.