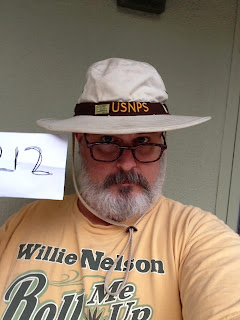 An extraordinary hat with an extraordinary story that comes from my second cousin Bryan Tschorn (his grandfather and my grandfather were brothers) who presented it to me today when we finally reconnected some 15 years after we last saw each other face to face. A former fighter of forest fires, Bryan says of its provenance: "After you're in a fire, the guys exchange things. This was in a fire in Jackson, Mississippi, in 2006 and was given to me by Danny Moore."

I did a little bit of rooting around to see if I could track down whether this style of NPS hat had a name. While I couldn't find one (beyond "Wide-Brimmed Cotton Hat"), I stumbled across references to several extraordinarily comprehensive books and manuals discussing and dissecting the National Park Service Uniform in mind-boggling detail. Among them "National Park Service uniforms: Ironing Out the Wrinkles, 1920-1932" and a link to download "Reference Manual 43: NPS Uniforms" which says the following about headgear [emphasis in the original]:

Ranger Hats and Accessories
The ranger hat is the most important, recognized and respected symbol associated with  the NPS, and should be worn with pride and care with the Service Uniform outdoors or in an entrance station, and in most situations with the Field Uniform.

The same manual (which dates to October 2000) says the following about this version:

So today's sincere hat-tip goes to my cousin Bryan for his thoughtful gift to the Project and more generally to those who fight fires in any and all capacities.


Q: OK, nice hat -- but what exactly is Project Cubbins, anyway?
A: One man's homage to Dr. Seuss and his second book, "The 500 Hats of Bartholemew Cubbins," which is celebrating the 75th anniversary of its publication in 2013, Project Cubbins is an attempt to document the wearing of a different hat or piece of headgear every day for 500 consecutive days. No do-aheads, no banking of hats, no retroactive entries. PC started on May 27, 2013 with Hat 1. Got hats? If you loan 'em, you'll get e'm back safe and sound!
Posted by Adam Tschorn at 1:25 PM