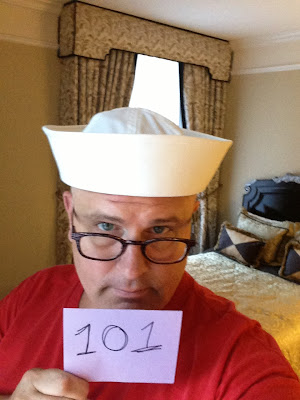 Day 101 / Hat 101: White cotton canvas "Dixie cup" U.S. Navy style sailor's cap. Purchased on a recent trip to the Surplus Value Center. Judging by the fact that the store claims to sell "genuine government surplus" and the product number on the tag inside the hat (DLA100-84-C-0644 - which seems to be  similar to the numbers found in other items from U.S. military uniforms) makes me think it is probably the real deal.

I started poking around to find out more about these iconic hats (traditionally part of the enlisted sailor's summer uniform) and found myself going down a serious hat rabbit hole.

Among the things I discovered before forcing myself to put the hat down and step away from the computer: they are (or at least were for many, many years) manufactured under contract for the U.S. government by Puerto Rico based Propper International, which churned out approximately 140,000 of them per month.

I found the following information about their manufacture at the Navy Department Library's website:

"Seventy-five rows of stitching keep the brim of the dixie cup stiff. The brims are made on an automatic brim stitcher and the crown is put together on a sewing machine. When the two parts are completed they are stitched together using the sewing machine. The three-part operation takes about seven and a half minutes."

According to the same site, which cites Marke A. Hensgen's "To Cap It All Off … A Fond Look at a Navy Trademark: Uses (and Abuses) of the 'Dixie Cup'" the U.S. Navy tried to phase out the hat with nicknames that include "squid lid," "Mason jar top" and "dog dish" for good back in 1973 but ultimately abandoned the effort.