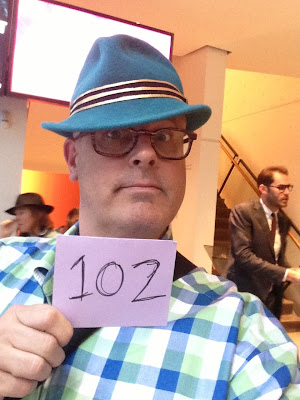 Day 102 / Hat 102: Ever since New York Fashion Week started I've been terrified of missing an installment of Project Cubbins, but today I took a leap of faith that I'd find suitable millinery somewhere in Manhattan

And wouldn't you know it, the hat gods delivered.

I found this awesome hat perched on the head of Decade's own Cameron Silver whom I spotted seated across from me at the David Hart menswear show earlier tonight. As we left the show, Silver introduced me to Rod Keenan, the Harlem-based hatter whose seriously stylish handiwork was featured in Hart's Spring Summer 2014 runway show.

Keenan's the real deal --  first studying fashion in Paris at Parsons School of Design and later receiving a millinery degree (who knew there was a specific degree?) from the Fashion Institute of Technology. He produces two collections a year - straw lids for Spring and felted fur for Fall (say that three times fast!).

When I breathless explained Project Cubbins to the nattily attired duo, Silver kindly doffed his cap for the cause (which, if my hat sleuthing is accurate, is the Tut style in Petrol from Keenan's Fall 2013 collection) and a wry smile crept across Keenan's face.

"Oh, you should come visit me over in Harlem," Keenan said. "I've got some hats."

Somehow I think that's the understatement of the year.

A sincere tip of the hat to both gents for indulging my whimsical pursuits.