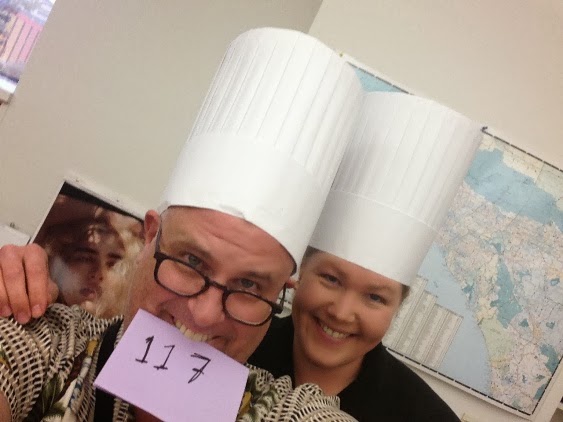 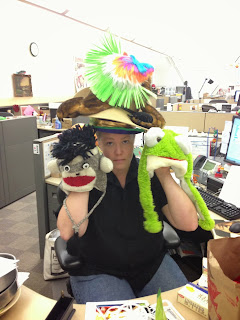 Courtesy of Noelle "Mad Hatter" Carter -- who appears with me in the above photo. You may remember her from  the beloved NC series of hats (that's her at right with a few of the ones from previous installments of the Project).

So what's the story behind the distinctive headgear? Carter shared the theories she'd heard and urged me to do a little exploring online. What I found pretty much jibes with her account.

According to the folks at The Straight Dope there are a couple of theories, one involves an unfortunate hair in a royal soup (followed by a beheading), one that involves chefs in the seventh century A.D. taking refuge with, and adopting the garb of, clergy (this is the version Carter had heard) and one that makes it a symbolic crown (as royal chefs were in a unique position to poison the king, they were treated better than the average subject, the theory goes).

Carter said there's also a story behind the number of pleats -- a topic also covered in the Straight Dope discussion (quoting from "A Pageant of Hats, Ancient and Modern," by Ruch Edwards Kilgour, copyright 1958)
"It was regarded as natural that any chef, worthy of the name, could cook an egg at least one hundred ways. The most-renowned chefs often boasted that they could serve their royal masters a different egg dish every day in the year, some of them so cleverly prepared, that aside from being highly palatable they had flavors as widely different as completely diverse kinds of foods. Today, noted chefs are seldom called upon to prove their prowess in this manner. Nevertheless, they still wear one hundred pleats on their hat, the old-time symbol of their skill in the egg department."

So a  tip 'o the toque and a crack of the egg to Noelle for whipping up this little bit of culinary couture.