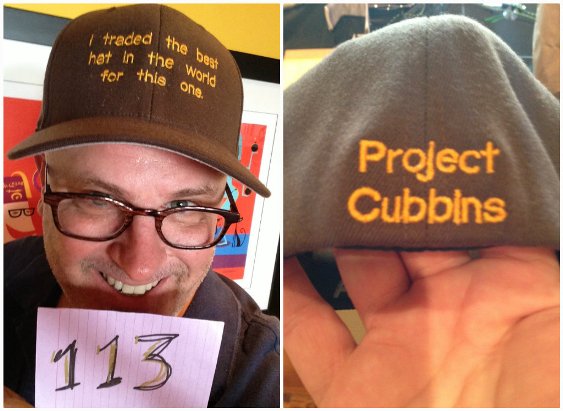 Day 113 / Hat 113: Brown, baseball-style cap with gold embroidery on front that reads: "I traded the best hat in the world for this one." Gold embroidery on back (pictured at left in above photo) reads: "Project Cubbins." Interior tag reads: "Flexfit, 83% acrylic, 15% wool and 2% P.U. Spandex. By Yupoong, Made in Bangladesh."

OK, I'll come right out with it -- this hat is a really, really special addition to the Project. I know I say that about a lot of hats, but there's a fun story behind it that is part of the magic that my quest has taken me on.

This hat arrived in a package that was waiting for me when I returned from New York Fashion Week. The sender, a Mr. Bill Dunn from Seattle, Washington, (and until the launch of Project Cubbins, a complete stranger to me), had first contacted me back in July.

His e-mail reads as follows:


"I stumbled upon your article where you mentioned a brown corduroy ball cap with 'Vermont '79' written on top of it. The reason I stumbled upon the article was because I am, in fact, looking for that same hat.
You see, I am a guy who is extraordinarily particular about the hats I choose to wear. I don't have multiple hats. I have one hat, and one hat only. And I wear that one hat for more than a decade.

In this case, it was the Vermont 79 hat.

I am neither from Vermont nor born in 1979. The design on the hat wasn't what made the hat 'my hat.'  It was the fit. There was something about that hat that just fit my brain cage perfectly. Every picture of me for the last 10 years includes that sweat-stained, dog-chewed, dishwasher-discolor we hat. It was my favorite.  Everyone knew it. Every picture of me had that hat. People would know what I was wearing every day.

Eventually, the elastic wore out and I had to put it down. 'Twas a sad day in my life. Literally.

In the last few years, I've tried a couple other hats. A Seattle Seahawks hat and a Washington Huskies hat. They just don't cut the mustard.

I have literally spent the last 3 years looking for that hat, and your article was the only mention I have ever found. In fact, as I write this, I am on a weekend getaway with my wife. I'm trying not to type too loud - I don't want my Seahawks to know that I'm trying to re-establish contact with an only flame - Vermont 79.

Is there any possible chance that you still have that hat?  If so, what would it take for you to let it go?

I appreciate your time. And the article."

Now, as you may know (even if you didn't before you read PC: 9) I did grow up in Vermont and was there in 1979 so I had formed a bit of an emotional attachment to the hat even though it was something the Bride had found at Old Navy years after I'd left the Green Mountain State. But Bill's e-mail was earnest and I told him if I couldn't track one down for him from the Old Navy folks I'd consider parting with mine -- but only in exchange for another hat I could wear for a future installement of Project Cubbins.

It was a promise I started to have second thoughts about almost as soon as I'd hit "send." I remember him asking for my mailing address about a month ago and feeling a pit in my stomach as I sent my address.

But when I opened the box from him last night and saw what he had sent in exchange, I immediately knew that "Vermont '79" would be going to a good home.

A sincere tip o' the hat to Bill Dunn -- you are a man among men. And your hat? She's on her way. Take good care of her.

The story brought a smile to my face, and is testimony how the simplest of projects ( though my brother will probably take issue with writing about 500 hats in 500 days is to be considered "simple") can bring unity, and a smile to total strangers face. Kudos on the project, bro.

WOOOO-HOOOO! Got 'er today (By the way, I really should proofread my emails before I send them)!

Putting it on was like watching Superman in the DVD player - it just felt good.

Thanks again for the project. And thanks, especially, for keeping your word to such a bizarre request from someone you'd never met.