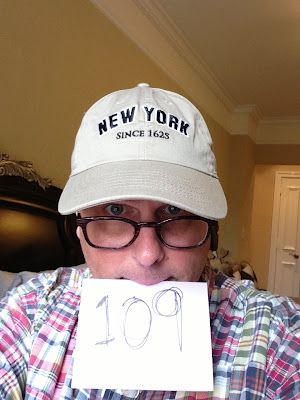 Day 109 / Hat 109: Khaki-colored, 100% cotton baseball-style cap (it's been awhile since you say one of these, right?) with "NEW YORK" in black, white-edged embroidery on the front with the words "Since 1625" right below it. The words "New York City" are embroidered on the back of the hat.

I purchased this hat for the Project earlier today from a gentleman set up at the southeast corner of 80th and Broadway. Dude man had LOTS of hats to choose from but I knew I wanted a hat that paid homage to my twice-yearly temporary hometown -- and I was intrigued by the  historical implications of the 1625 date.

Those of you with a better handle on the city's origins probably well know that the year 1625 is noted on the Official Seal of New York City and signifies the year Fort Amsterdam was designated the capital of the province of New Amsterdam, the colonial Dutch settlement which would later become the City of New York." According to the History Channel, New Amsterdam became New York on September 8, 1664 -- 349 years and four days ago.

At first I thought it might be helpful to point this out to dude man since he's essentially got a whole row of hats sitting on that table out on the street corner that are historically inaccurate.Then I thought better of it.