Project Cubbins: Hat 114 - My Way or the Freeway Edition 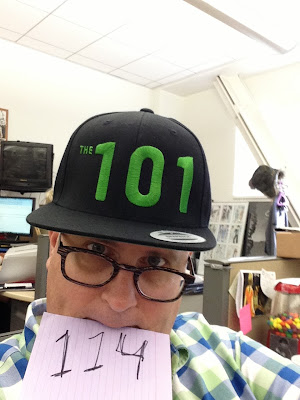 The second in the Project Cubbins freeway series from Sisters of Los Angeles, this lid pays homage to Angelenos' love/hate relationship with the freeway system.

For those of you unfamiliar with our asphalt-covered ways out here, the 101 is also known as the "Hollywood Freeway," its southern end is at the Four Level Interchange in downtown L.A. and top the north it ends at the to the Golden State Freeway in the Sun Valley district of Los Angeles.

The first section (downtown to the San Fernando Valley) opened in 1964 and the second (from that point to the I-5) in 1968, making the 101 the second-oldest Los Angeles freeway (behind the Arroyo Seco Parkway). Oh, and here's a fun fact: Its entire length falls within the boundaries of the City of Angels.

You won't need a map to find your way to the fact that today's sincere tip o' the hat goes to the Sisters of Los Angeles.