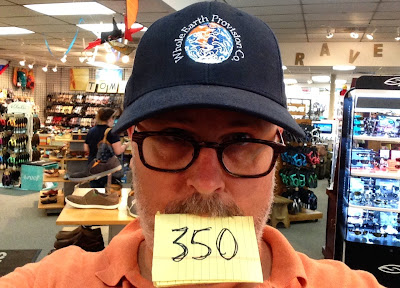 The first thing we thought of when we saw the sign out front was the legendary Whole Earth Catalog, which we thought had ceased publication years ago. We corralled an employee ( a fellow named Bill) who explained there was a connection. Rather than paraphrase poorly at (I wasn't taking notes), I'm pasting in the following excerpt from the store's website:

"As the 1960s ended, Jack and Linda Jones were ready for a change. They received encouragement from two unlikely sources: a horoscope and a book. The horoscope in Vogue magazine was clear: “Quit your job and start a new project.” The message from the Whole Earth Catalog gave direction: “...we’ve been telling everyone who’s inquired politely if they could open a store - Go Ahead.”

The Whole Earth Catalog was a revolutionary publication that flourished in the 1960s into the early 1980s. The Catalog encouraged “individuals to conduct their own education, find their own inspiration, shape their own environment and share the adventure with whoever is interested.” The Catalog had hundreds of pages filled with short descriptions of books and tools that presented an encyclopedic view of the world and how it worked from the microscopic to the galactic.

For an item to be included in the catalog, it had to meet four criteria: useful as a tool, relevant to independent education, high quality and/or low cost and easily available by mail. But what the Catalog’s readers really longed for was a store where they could actually lay their hands on the books and tools they’d been reading about. Jack and Linda Jones, with the help of their friends and family, made that dream a reality by opening a retail store, Whole Earth Provision Co., based on the ideals and products found in the Whole Earth Catalog. 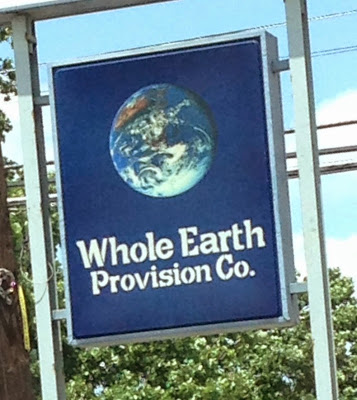 The first Whole Earth store opened on December 14, 1970, a block from the University of Texas campus in Austin. It was so successful that the shelves were empty ten days later. The store had an eclectic stock where shoppers could find items like “how-to” and travel books (including the Whole Earth Catalog), grain mills, massage oils, baby carriers, geodesic dome model kits, Aladdin mantle lamps and beekeeping supplies. Gradually, hiking boots and lightweight camping equipment like tents, backpacks and sleeping bags were added to the mix."

According to its website the Whole Earth Provision Co. now has nine stores in five Texas cities - including three in Austin.
Since Austin is where Whole Foods got its start (we also popped into its flagship store today) I can only wonder if the name was somehow inspired by the Whole Earth name (store or catalog).
Another bit of trivia? Our friend Dudley DeZonia once worked at the original Whole Earth Catalog, I believe it was from 1969 until its demise in 1971.