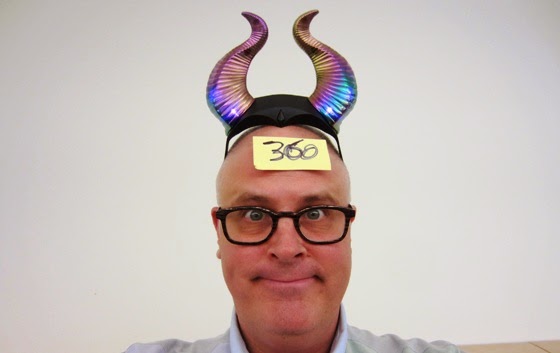 Day 360 / Hat 360:  Definitely skewing more toward the headgear than traditional hat (I'm pointing that out at the front end s Dora doesn't have to), this is essentially a pair of battery-powered plastic light-up "Maleficent" horns attached to a wide plastic headband shaped skull clamp (Or maybe it just feels like a skull clamp on my head.) Raised tone-on-tone plastic lettering on battery cover reads: "2014 Jakks, Malibu, CA, [made in] China."

These points of (dark) light arrived in the office a few days ago as part of the merchandise-marketing efforts in advance of Angelina Jolie's turn as the horn-headdressed witch in the upcoming Disney movie which hits theaters May 30.(In case you want to score a pair of your own Maleficent Glow Horns, (MSRP $9.99), they're available at the big box retailers like Kmart and Target.)

And if you think the horn-sportin' Tschorn looks familiar, you're not imagining things. I slapped a paper pair upon my pate back at PC 77: Throwing Horns after attending the D23 Expo in Anaheim last August.

Which means now if, if someone asks to borrow a pair of horns, I can respond with: "Paper or plastic?"