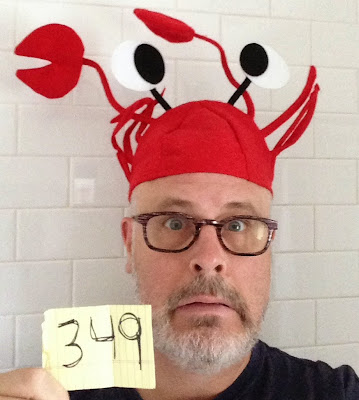 Purchased for the Project by my sister-in-law, Kathleen who spotted it in the Baltimore airport during a connection en route to Austin, Texas, to meet the Bride and me.

So today's tip o' the crab claw goes to 'Thleen for her discerning eye for headgear - especially in light of the fact that she can't eat crab, lobster and the like 'cause she's allergic.

How's that for not being the least bit shellfish?

A: One man's homage to Dr. Seuss and his second book, "The 500 Hats of Bartholemew Cubbins," which celebrated the 75th anniversary of its publication in 2013, Project Cubbins is an attempt to document the wearing of a different hat or piece of headgear every day for 500 consecutive days. No do-aheads, no banking of hats, no retroactive entries. PC started on May 27, 2013 with Hat 1.
Posted by Adam Tschorn at 4:35 PM