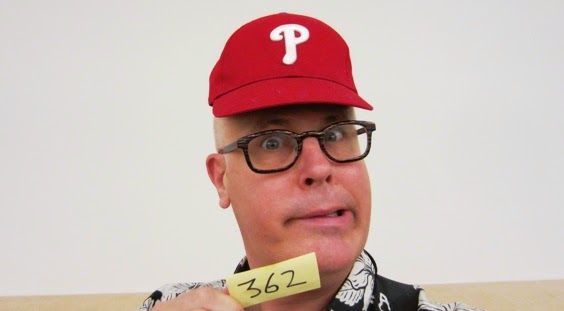 Interior tag reads: "Team MLB, made in Bangladesh" on left side and: "by OC Sports, official licensee of MLB, Youth" on righ.

The "youth" part refers to the size as this hat was plucked from the MRBOH and it belongs to Marilyn's son Javier who has already graciously (if unwittingly) provided a hat trick of hats to the Project (including one of my all-time favorites, the googly-eyed bucket hat worn for PC 336).

And Marilyn tells me it's part of nine-year-old dude man's baseball uniform (she has a cute photo at her desk of Javier swinging for the fences in his full ensemble) and his youth baseball team is called the Phillies -- same as that MLB team from Philadelphia.

A: One man's homage to Dr. Seuss and his second book, "The 500 Hats of Bartholemew Cubbins," which celebrated the 75th anniversary of its publication in 2013, Project Cubbins is an attempt to document the wearing of a different hat or piece of headgear every day for 500 consecutive days. No do-aheads, no banking of hats, no retroactive entries. PC started on May 27, 2013 with Hat 1.
Posted by Adam Tschorn at 8:20 AM