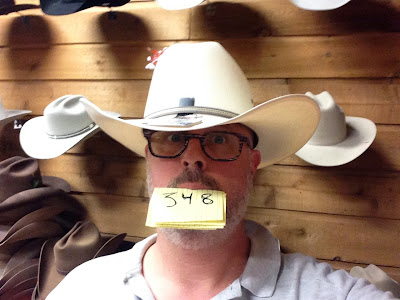 Interior leather sweatband stamped with the words: "Resistol, self-conforming, George Strait Collection. Made in Texas, USA," on one side and "xxxxx10xxxxx Genuine Shantung Panama" on the other. (I didn't know this until looking it up online, but that apparently designates a tightly rolled paper woven to resemble straw.)

Interior tag describes it as a style called Cole with a 4-inch brim in size 7 1/2.

This hat was stealth-snapped at Allens Boots on South Congress Street in Austin this afternoon (yeah, I messed with Texas) but don't feel the least bit bad as the Bride was distracting the sales team by purchasing a pair of Liberty Black, made-in-Mexico, chocolate brown, fringe booties.

Despite the name, Allens represents in the hat department too, and for a fee of $5, will shape your hat.