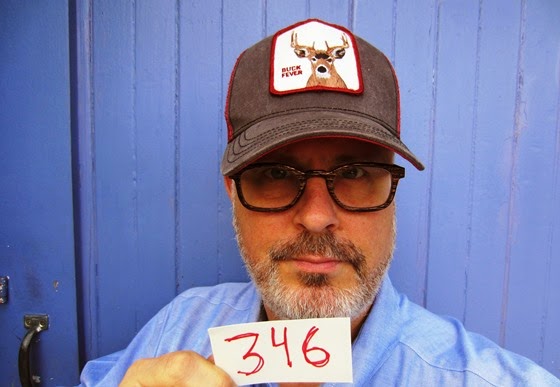 Day 346 / Hat 346: Trucker-style cap with maroon mesh back and brown cloth front. Embroidered patch on front depicts an eight-point buck along with the words "Buck Fever." Interior tag reads: "Goorin Bros." and fabrication is listed as 57% polyester and 43% cotton. Made in China.

This is the sophomore contribution to the Project from my UTB neighbor Carrie (her first was this Derby-appropriate dapperness), who appears to be nearly as millinery mad as myself. It also marks the Project's sophomore installment of Goorin's "Animal Farm" series (the first was PC 313 aka "Naughty Lamb").


A: One man's homage to Dr. Seuss and his second book, "The 500 Hats of Bartholemew Cubbins," which celebrated the 75th anniversary of its publication in 2013, Project Cubbins is an attempt to document the wearing of a different hat or piece of headgear every day for 500 consecutive days. No do-aheads, no banking of hats, no retroactive entries. PC started on May 27, 2013 with Hat 1.
Posted by Adam Tschorn at 8:20 AM