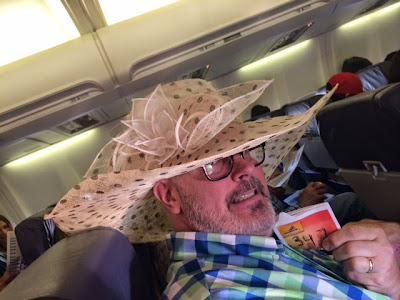 Day 347 / Hat 347: Cream-colored, broad-brimmed sinamay hat with black polka dots and large bow detail. Interior label reads: "C&C Exclusive" and interior tag reads: "100% sinamay, made in China."
Photographed on this morning's Southwest Airlines  flight from LAX to Austin, this hat fell into my lap - almost literally - as it belongs to my port-side seatmate (the Bride is starboard) a delightful woman by the name of Elspeth Connatty.
I was able to control my hat-borrowing impulses when she first sat down, but after the Bride pointed out Ms. Connatty had not one but THREE summery, broad-brimmed hats sitting quietly on her lap, it was more than I could bear. When the hat gods speak who am I to not listen?

It turns out EC is hatkeeper for her family's trip to an Austin wedding. "We're English and people expect the English ladies to go all out with the hats at weddings." (I am paraphrasing a bit here.)

Team Connatty hails from the Bay Area (Richmond, California, to be exact) and Elspeth is a midwife by trade‎ (at UCSF Medical Center).

Ms. Connatty even remembers where she purchased the hat - the Berkeley Hat Shop on Telegraph.

So today's hat-tip most assuredly goes to Elspeth Connatty for indulging my millinery whimsy.

A: One man's homage to Dr. Seuss and his second book, "The 500 Hats of Bartholemew Cubbins," which celebrated the 75th anniversary of its publication in 2013, Project Cubbins is an attempt to document the wearing of a different hat or piece of headgear every day for 500 consecutive days. No do-aheads, no banking of hats, no retroactive entries. PC started on May 27, 2013 with Hat 1.
Posted by Adam Tschorn at 1:16 PM