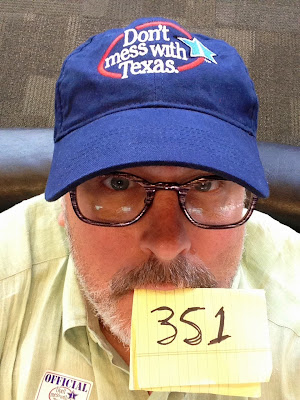 Day 351 / Hat 351: Navy blue, baseball-style cap with embroidery detail on front that reads: "Don"t mess with Texas" in white letters surrounded by a red oval with a blue, five-pointed star logo with white dotted-line design down the center.

Purchased (not stealth-snapped!) at the Stars of Austin gift shop at the the Austin-Bergstrom Airport in Austin, Texas, enroute home.

And yes, we DID mess with Texas - in the best possible way - during our mini-break in the City of the Eternal Sound Check (there's an aloe vera plant somewhere out there with the battle scars to prove it).

While most people have heard the oft-repeated phrase "Don't mess with Texas," most probably aren't aware that its origin is not political but environmental in nature, coined as part of a statewide anti-littering campaign in 1986 and it's a registered trademark of the Texas Department of Transportation.

In fact, a sticker on the underside of the brim notes that  "a portion of the proceeds from the sales of these products will fund the state's litter prevention program ..."

So you might say that while I messed with Texas, I cleaned up after myself too!